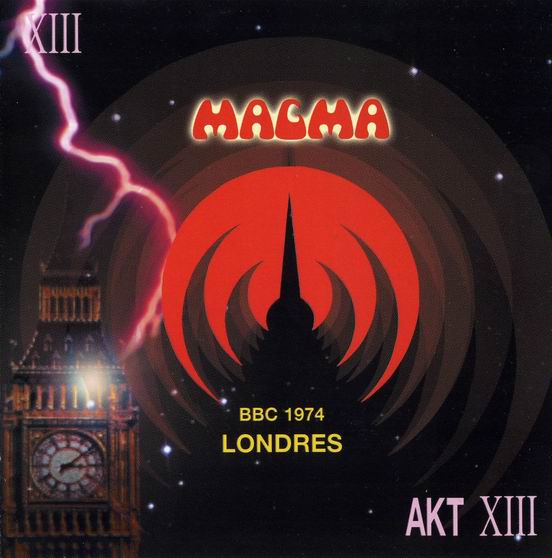 This recording carried out on the 14 of March 1974 in the London BBC studios, is a marvellous and unhoped-for gift which has been given.to us. It is a miracle to be able to listen, with excellent sound quality, to ” THEUSZ HAMTAAHK ” and ” KOHNTARKOSZ “, those magmaian masterpieces, in unique versions, played by the group which was at the origin of their creation. If the successive versions played by the MAGMA of 75-76 are most familiar for us, these which are offered to us here, are of major interest on several levels: first of all, their structure, which at that time was not yet finalised, and comprised sequences which were either arranged thereafter in a different way, or removed; and their execution, with a “THEUSZ HAMTAAHK ” whose slowness of tempo is equalled only by the violence contained therein, and a ” KOHNTARKOSZ” where the magic of the dual keyboards brings to this piece an alternative which is as spellbounding as that generated at the Tavern of Olympia the following year by the divine flights of Didier LOCKWOOD’s violin. Lastly, these two pieces allow us to appreciate, for the first time under ” live “conditions , a band, welded around the tandem of Christian VANDER/Jannik TOP, whose exceptional value has perhaps been a little forgotten in the intervening years.