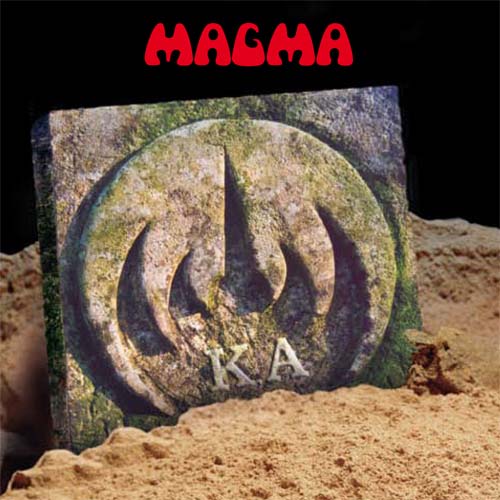 So. After 20 years of evading the point Christian Vander has finally deigned to the return to the masterwork style which brought us all to his door in the first place. With our tongues hanging out. Of all the many noble attempts of the prog rockers to create a grand compositional style which blended elements from classical music with rock, none, in my view, ever reached the intensity, complexity and raw savage excitement of the great Magma masterworks such as M.D.K, Kohntarkosz, Theusz Hamtaahk, etc…
Now it’s one thing to rest on your laurels and quite another to come back after such a great amount of time and to try and completely re-capture the original essence of your art. So many come backs have turned into let-downs ; and thus it is with some trepidation that I approached listening to K.A. I had seen many of the great Magma line-ups of the seventies performing these classics live. So the other question in my mind was : could the present band do it ?
All of you out there reading this will be delirious to know that it is almost as if time stood still. Of course K.A itself was composed 30 years ago and is the missing link between MDK and Kohntarkosz but that is hardly the point. K.A is the real thing. The hypnotic tension, the explosive climaxes, the fantastic pyrotechnic drumming, the massive and intricate vocal arrangements, the gut-wrenching bass lines and the classical pomposity fused with almost jungle-strength R n& B – all the hallmarks of Christian Vander’s special genius are found here intact.
I have nothing further to say except that we got lucky. Buy it.