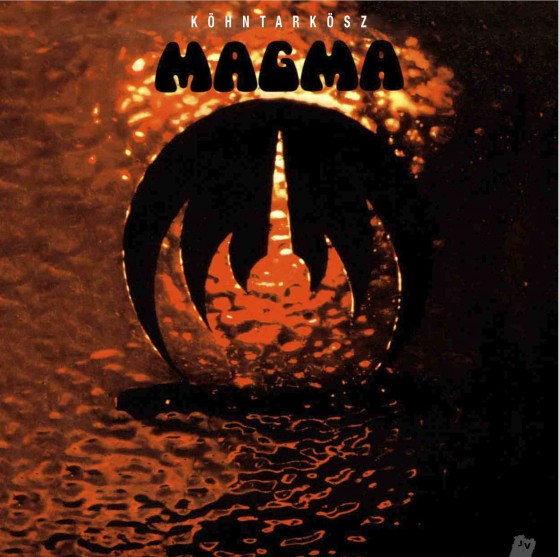 Not being a man who tended to sit on his laurels Christian VANDER decided, with KOHNTARKOSZ, recorded in 1974, to set off in a completely new musical direction, putting anyone who expected a simple encore to MEKANIK DESTRUKTIW KOMMANDOH straight onto the back foot.
Fortified by the success of the last album, the majority of musicians would be delighted to lay back into their own style and play safe. Not so for VANDER, who was driven to surpass himself, to bring to birth a new masterwork. Considered against the other albums, KOHNTARKOSZ (the composition) used a profoundly original approach
to lift the rhythmic pulse and float it above the music, so that instead of marking time it continually sits above the metre. The savage virtuoso drumming of the earlier albums is here replaced by a more restrained approach, in which every stick hit seems to weigh twenty tons by contrast. The result is a mysterious incandescent atmosphere which holds the listener in breathless thrall right up to the explosive finale.
If, when compared with M.D.K., the sound of the band has changed significantly, with the monster bass foundation laid down by Jannick TOP and the other-worldly keyboard playing come to the fore at the expense of the vocal work, the spirit of MAGMA nevertheless remains intact. This spirit is also found in ORK ALARM, TOP’s first composition for MAGMA, and the final piece, COLTRANE SUNDIA, a vibrant and heartfelt tribute to John COLTRANE, the inspiration for all this marvellous music.